Center for Congregational Song launches as antidote to ‘worship wars’funny horoscope 2020’This idea that we need to be at war with each other over worship styles, I find ridiculous,’ said center director Brian Hehn. 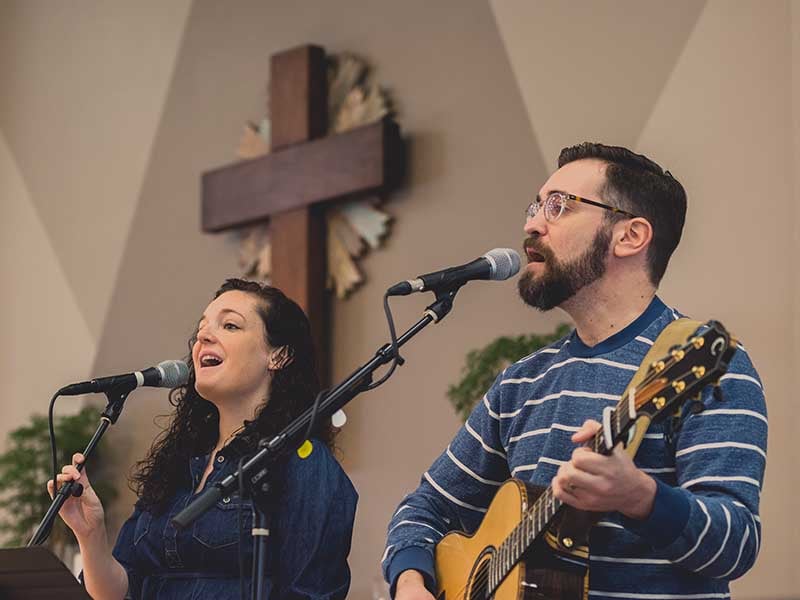 (RNS) — Praise team leaders, organists, gospel choir members and other lovers of church music will gather in Dallas this weekend to launch the Center for Congregational Song in an effort to counter the “worship wars.”

The online center is being kicked off at an Oct. 15-16 conference — bookended by a gospel sing in a park and “beer and hymns” at a local brewery — that comes at a time when musicians are trying to re-energize an aspect of church life that often gets mired in feuds about style, volume and the complexity of the songs sung during worship.

Brian Hehn, director of the Center for Congregational Song. Photo by Serkan Zanagar

“This idea that we need to be at war with each other over worship styles, I find ridiculous, and it’s very unhealthy in general,” said Brian Hehn, the director of the new center, an arm of the Hymn Society. “The center is an effort, in part, to do away with that idea.”

For decades, some congregants have differed strongly over whether traditional or contemporary music should reign supreme in their sanctuaries. Church signs sometimes denote the times for separate traditional and contemporary services. Other congregations have experimented with “blended” worship that includes more than one genre.

As more than 140 people gather to hear from leaders of different racial, ethnic and denominational backgrounds, they will sing songs ranging from Ana Hernández’s simple worship song “Open My Heart” to Isaac Watts’ hymn “We’re Marching to Zion.” Hehn hopes the in-person discussion will help people learn from one another.

Through the online center, the Hymn Society aims to foster new students of church music and aid small-church pastors who have to plan sermons as well as songs each week.

“The center wants to be a part of this kind of renewal of a sense of collaboration and collegiality,” said Hehn, who has led worship for Baptists, Roman Catholics, United Methodists and Presbyterians, among others.

RELATED: Songs of worship: Why we sing to the Lord

One thing that seems to engender more agreement is a sense that no matter how they sing, they want to sing.

“There’s just a resurgence in acknowledging how important it is that we sing together and it’s coming to a head because I think we have reached a point in our surrounding culture where it is now officially countercultural,” Hehn said, pointing to the popularity of shows like “The Voice” that emphasize solo performances. 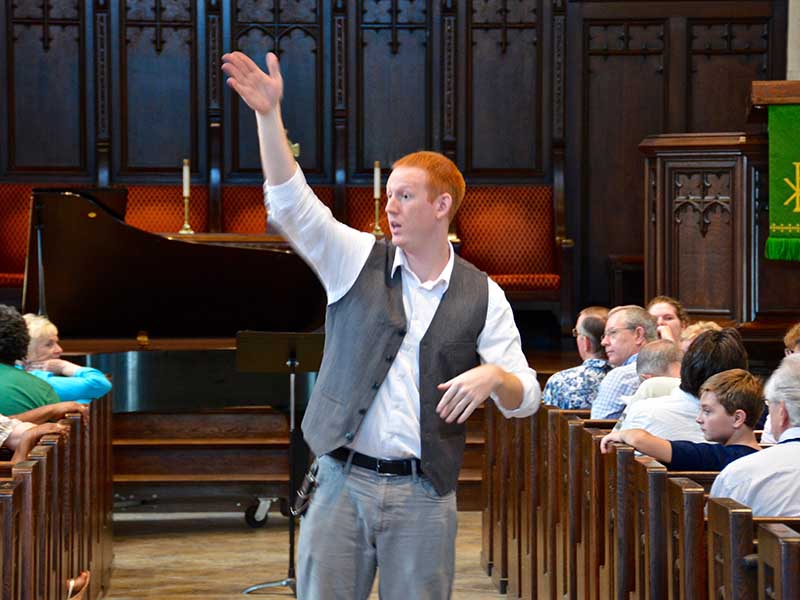 He said church leaders are saying that “if we let the surrounding culture tell us what we should be doing in worship, then we will stop singing together and that would be terrible.”

The society, which is based in Overland Park, Kan., is trying to rebrand itself as it nears its 100th anniversary in 2022 and expand its outreach by recommending books, audio tracks and podcasts that can undergird a passion for congregational music. The center will offer retreats and workshops for composers and highlight local singing events, such as an upcoming hymn festival in Los Angeles scheduled to mark the 500th anniversary of the Protestant Reformation.

Hehn will join a group of experts from a range of perspectives — a worship pastor at a bilingual Church of the Nazarene ministry in California, an organist at an Episcopal church in Virginia and a graduate student in liturgical studies at Duke Divinity School — to offer additional insights through a new “Centered in Song” blog. 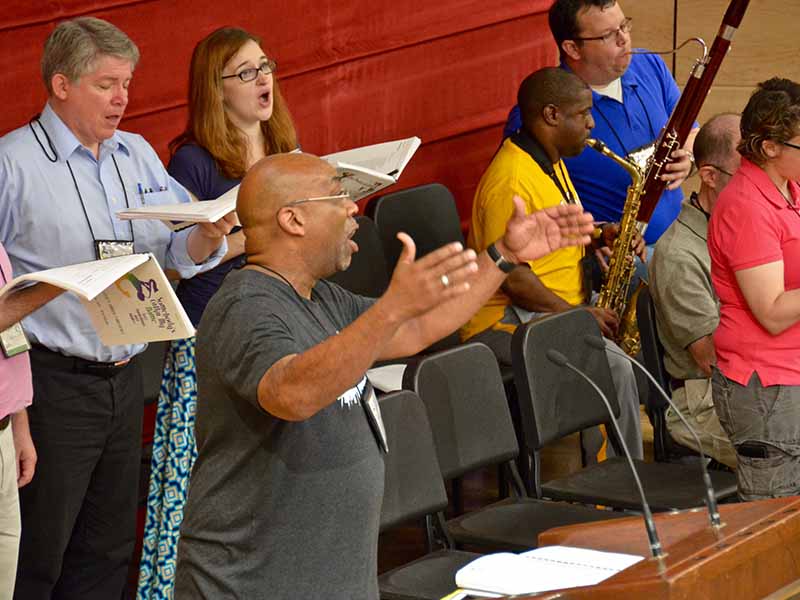 Like other music-oriented nonprofits, the Hymn Society has seen a gradual drop in membership — from 2,100 in 2004 to 1,600 in 2017 — as retiring musicians have not been replaced by millennials. Organizers of the new center had hoped to raise $2.2 million for an endowment to support it and have thus far raised about $1.2 million, which Hehn said will cover operating costs, while other funding will pay for programs.

RELATED: Organists declining but still in demand for Easter

The Hymn Society is not the only one beating the drum of improving congregational song.

Contemporary hymn writers Keith and Kristyn Getty have encouraged everything from singing at home to a global hymn sing in hopes of encouraging more participation when people gather in the pews.

At the Southern Baptist Convention’s annual Pastors’ Conference in June, Keith Getty spoke about the need for clergy to encourage congregants to sing as a demonstration of their faith to visitors and children who may not yet be believers.

“Pastors, if you love your congregation, you need to take a lead in the teaching of the doctrine of singing and worship and in the songs that you sing,” he said, noting that historically, singing was key to large American revivals. “We need to be building singing congregations.” 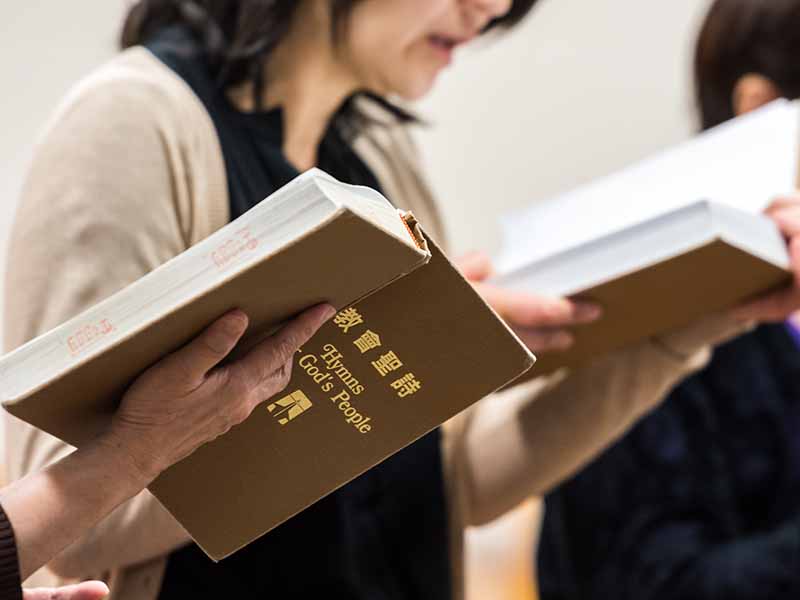 Despite the efforts to invigorate the diverse music of churches, congregations do not seem to be in any immediate danger of losing their voices.

The National Congregations Study showed that, while there has been a decline in choirs, more than 96 percent of churches still had singing by the congregation at their main services in 2012, as they did in 1998 and 2006.

Frank Byers, a worship leader at an interdenominational and interracial church near Nashville, Tenn., said that music leaders need to be taught how to draw their congregants into singing with them.