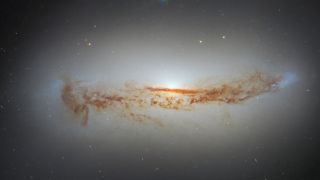 NASA’s venerable space telescope has captured a stunning new view of a galaxy with an active black hole obscured by tendrils of dark dust.

The spiral galaxy, known as NGC 7172, is located about 110 million light-years from Earth in the constellation Piscis Austrinus. The image combines two sets of images taken by the Hubble Space Telescope’s Advanced Camera for Surveys and Wide Field Camera 3.

The new image, which NASA shared on April 1, highlights tendrils of dark dust threaded across the heart of the galaxy. That dust obscures the bright central region of the galaxy.

Related: Hubble telescope shows the sparkling side of a spiral galaxy

When viewed from the side, the dusty tendrils make NGC 7172 look like a normal spiral galaxy. However, NGC 7172 actually has an incredibly bright, active galactic nucleus, according to a NASA statement.

“When astronomers inspected NGC 7172 across the electromagnetic spectrum they quickly discovered that there was more to it than meets the eye,” NASA officials said in the statement. “NGC 7172 is a Seyfert galaxy — a type of galaxy with an intensely luminous active galactic nucleus powered by matter accreting onto a supermassive black hole.”

— The best Hubble Space Telescope images of all time!— Serpens galaxy slithers through new Hubble photo— Hubble telescope was at the perfect angle to capture this nearly impossible shot of two ‘dancing galaxies’

As dust and gas falls into the galaxy’s central supermassive black hole, it emits bright rays of light. In fact, a galaxy with an active galactic nucleus is able to produce more radiation than the entire rest of the galaxy.

The recent Hubble observations were collected as part of a study of nearby active galactic nuclei. Hubble has been observing the universe since its launch in April 1990; its Advanced Camera for Surveys recently marked 20 years in space.