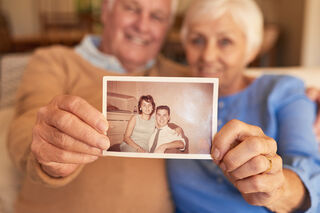 Nostalgic photos that evoke positive emotions have the power to help us escape today’s pain and suffering by reminding us of happier times. Viewing nostalgia-inducing images takes us to that “warm, safe place” in our mind’s eye.

Whenever I’m feeling blue, watching a slideshow of “over the years” photographs on my smartphone never fails to lift my spirits. Any vintage photograph with a Kodachrome color palette of oversaturated reds and muted yellows has the same effect. The yellow dye used to print Kodak pictures fades faster than the other colors, giving these late 20th-century photographic prints a distinctive nostalgic hue.

New fMRI-based research suggests that nostalgia-inducing photographs do more than just give us a warm fuzzy feeling; they also activate pain-relieving mechanisms in the brain. The researchers found that viewing nostalgic images reduced subjective ratings of low-intensity pain (thermal heat on the forearm) more than viewing control images that didn’t evoke nostalgia. These findings (Zhang et al., 2022) were published on March 1 in the peer-reviewed Journal of Neuroscience.

“Our study found that the thalamus plays a key role as a functional linkage between nostalgia and pain, suggesting a possible analgesic modulatory mechanism of nostalgia,” the authors note.

Based on these findings, Ming Zhang and colleagues speculate that viewing nostalgic photos might be a drug-free way to alleviate mild pain without taking over-the-counter or prescription analgesics. “Nostalgia-induced analgesic effects were confirmed in our experiment; however, this effect was only significant for relatively weak noxious stimuli,” the authors explain.

For this study, the researchers monitored the brain activity of adults using fMRI neuroimaging while participants looked at nostalgic images taken from pop-culture sources that corresponded to each person’s childhood.

For example, someone who grew up in the 1980s was shown photos of popular TV shows, commercials, or cartoons from that era while a thermal heating pad on their forearm went from cool to scorching hot. For the control condition, participants were shown very recent, modern-day images from pop culture that didn’t evoke nostalgia.

When the researchers analyzed the fMRI data, they found that the thalamus—which acts as a type of relay station between different brain regions—played a significant role in modulating nostalgia-induced analgesia. “The thalamus integrates the information generated by the nostalgic state, implying a thalamus-based central functional linkage in the nostalgia-induced analgesic process,” the authors write. 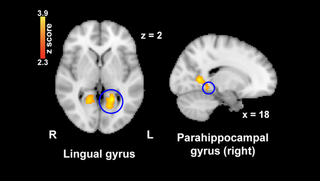 The thalamus modulates activity along analgesic, pain-relieving pathways in the brain. Zhang et al. speculate that nostalgia-inducing images cause the thalamus to transmit downstream from the forebrain to the brain stem via the periaqueductal gray (PAG).

“The PAG then transmits the regulatory signal back to the dorsolateral prefrontal cortex (dlPFC) prefrontal cortex to attenuate nociceptive processing, suggesting that nostalgic analgesia operates through the thalamus-PAG-dlPFC pathways,” the authors explain. “These findings offer implications and perspectives for the further development and improvement of non-drug, psychological analgesia.”

The latest (2022) findings on nostalgia-induced pain relief advance our understanding of which brain mechanisms facilitate psychological analgesia. “Based on our findings, we propose a possible model of thalamus-centered pathways to explain the analgesic effect of nostalgia,” Zhang et al. conclude.