Indian priest says Yemeni captors did him no physical harm5-DecHe says his captors feigned hitting him on videos seeking ransom. 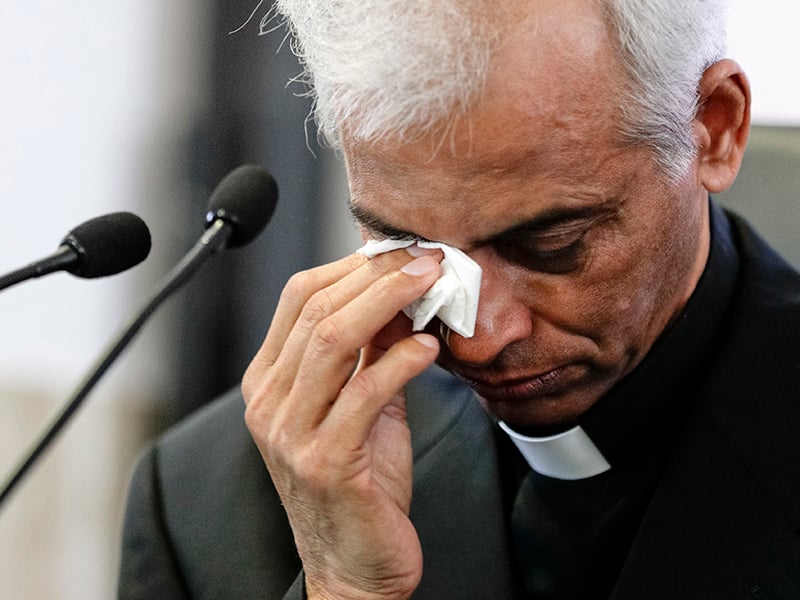 The Rev. Tom Uzhunnalil wipes tears from his eyes after a moment of commotion during a news conference on his recent rescue from Yemeni militants, in Rome, Sept. 16, 2017. Uzhunnalil had worked for more than four years as a chaplain at the home in Aden in southern Yemen established by Mother Teresa’s Missionaries of Charity and was abducted by militants in March 2016 when they attacked the home, killing 16 people, including four nuns. (AP Photo/Andrew Medichini) September 16, 2017 By Jerome Socolovsky ShareTweetShare

VATICAN CITY (AP) — A Catholic priest from India who was freed after being held 18 months in Yemen said Saturday (Sept. 16) that he was never physically harmed, even if his captors feigned hitting him on videos released during his captivity. Officials said they had no knowledge of a ransom having been paid.

The Rev. Tom Uzhunnalil was kidnapped from a home for senior citizens in Aden, southern Yemen, established by Mother Teresa’s Missionaries of Charity in March 2016. Four nuns were killed during the attack. Uzhunnalil’s voice broke as he publicly expressed his condolences.

“I thank God Almighty for this day. He saved me healthy enough. Clear mind. Emotions under control until now,” the 59-year-old Uzhunnalil said. “God has been extremely kind to me. No gun was pointed at me.”

He said that when the home for senior citizens was attacked, he identified himself as an Indian and he was brought to another room “while they killed the others.”

Indian officials announced his release on Tuesday, and images show a bearded, gaunt Uzhunnalil descending from an airplane in Muscat, Oman. The priest said he had been transferred from Yemen by car to Oman and then brought by air to the capital before continuing his journey to Rome.

The priest said he didn’t know his kidnappers’ identities or affiliations and believed their motive was ransom, although the head of Uzhunnalil’s Salesian order, Don A.F. Artime, said he had no knowledge of any ransom having been paid.

“No one ever told us that they asked for money. No one asked us for even a euro,” Artime said. “We don’t know anything about this. This is the whole truth. And I believe that Father Tom knows even less.”

The mechanisms behind his release also were unclear, but the Vatican has thanked the Sultan of Oman in a statement and Uzhunnalil thanked leaders in his native India.

The priest said his captors never harmed him, even if in some videos they made it appear that way in an effort to get a speedy response in negotiations. They provided tablets to treat his diabetes and took care of his basic needs. He was transferred several times during his captivity, but he doesn’t know where he was held. His captors kept their faces covered in his presence, he said.

Artime said the priest lost about 30 kilograms (66 pounds) during the ordeal and described his health as “very delicate, very weak,” adding “he is calm of spirit.”

During his captivity, Uzhunnalil said he prayed and exercised his mind by reciting Mass by memory.

When he was loaded into the trunk of a car when he was first kidnapped, Uzhunnalil said that the tabernacle from the altar inside the senior home was at his feet. His hands weren’t tied, and he was able to reach under the velvet cloth and touch it, confirming that it contained four or five Eucharistic hosts that he had blessed the day before.

“So I said to myself, without the knowledge of God, nothing will happen to me,” he said.

5-DecIndian priest says Yemeni captors did him no physical harm